carolsv
PA, NJ, United States
I am a baby boomer daughter of a paratrooper WWII dad, Arthur 'Dutch' Schultz, 82nd Airborne, who was portrayed in The Longest Day as a citizen soldier on D-Day. I am also the stepdaughter of a Navy WWII radar specialist on the Cleveland, a light cruiser in the Pacific. I'm an attorney, professor, writer, wife, mom and yoga enthusiast.

I was asked to review a book. For Love and Liberty, by Stephen Grimble. It is interesting in terms of what the author thinks the founding fathers would do today in terms of the Constitution and the direction of America. The book is fairly well written, but it has a very strong political point of view. If one does not agree with the author's perspective on politics and the interpretation of the Constitution, you will not enjoy the book. As a former professor of Constitutional Law, I find that many points that are given as fact are in reality open to interpretation. Overall, if you agree with the author's politics, get the book.
Posted by carolsv at Monday, March 12, 2012 1 comment:

I have created a website which focuses on my book, The Hidden Legacy of World War II. http://www.carolschultzvento.com/
Posted by carolsv at Thursday, February 09, 2012 No comments:

Camp Hill, PA - Sunbury Press has released "The Hidden Legacy of World War II: A Daughter's Journey of Discovery" by Dr. Carol Schultz Vento, the daughter of famed D-Day and Battle of the Bulge paratrooper Arthur "Dutch" Schultz. Vento's research attributes PTSD to many of the issues WW2 veterans experienced following the war, including her father's.

Daughters, fathers and war - three words seldom used together. In "The Hidden Legacy of World War II: A Daughter's Journey of Discovery", Carol Schultz Vento weaves life with her paratrooper father into the larger narrative of World War II and the homecoming of the Greatest Generation. The book describes the seldom told story of how the war trauma of World War II impacted one family. This personal story is combined with the author's thorough research and investigation of the reality for those World War II veterans who could not forget the horrors of war. This nonfiction work fills in the missing pieces of the commonly accepted societal view of World War II veterans as stoic and unwavering, a true but incomplete portrait of that generation of warrior.

Posted by carolsv at Saturday, December 17, 2011 No comments:

My father is portrayed by Richard Beymer as the young paratrooper who deliberately loses the money he won shooting craps.
Posted by carolsv at Tuesday, October 11, 2011 No comments:

Medal of Honor recipient speaks out about PTSD

Medal of Honor recipients urge those in the military to seek help. 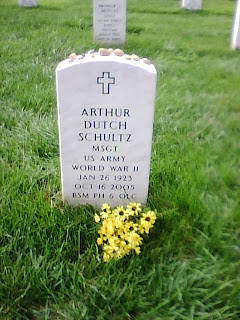 My book, The Hidden Legacy of World War II: A Daughter's Journey of Discovery, will be published by Sunbury Press.
Posted by carolsv at Sunday, October 09, 2011 No comments:

By Phil Ward, Author of:
THOSE WHO DARE
IS IT TRUE?

Those Who Dare, a World War II historical novel--it’s all true except the parts I made up or accidently got wrong-- is the first book in the Raiding Forces Series. The concept is to tell the little known parts of WWII that were extremely important when they were taking place but that history has passed by as bigger events overshadowed them.

The story begins when Lt. John Randal an American volunteer serving in the British Army arrives in Calais France in 1940. The British Green Jacket Brigade consisting of a battalion of the Kings Royal Rifle Corp, a battalion of the Rifle Brigade and the 3rd Royal Tank Regiment were assigned the task of holding Calais against a German Panzer Corp that was racing across France and if not stopped would slam into the flank of approximately 500,000 Allied troops at Dunkirk waiting to be evacuated. If that happened the war would be lost.

Calais was in utter chaos. The ship Lt. Randal was on came under air attack as it docked, the destroyer escorting it was sunk, a riot was in progress on the docks as fleeing troops from disintegrating Allied units falling back on the port tried to force their way onto his ship to escape the German onslaught and long range artillery was intermittingly incoming. The Green Jackets were under strength and without heavy weapons while the 3rd RTR had been ordered to torch their tanks before they could fall into German hands and had actually burned several before cooler heads prevailed.

All of this is true.

Lt. Randal was assigned two platoons one each from the KRRC and the RB plus a handful of Royal Marines with orders to screen the right flank of the Calais defense zone. Since he had served in the US 26th Cavalry Regiment (Philippine Scouts) and had operated against the Huk’s Lt. Randal was experienced in guerilla tactics. He launched a seventy-two hour hit and run campaign against the oncoming German Panzers with Swamp Fox Force, as his men called themselves. Eventually Lt. Randal escaped the death trap Calais became (virtually the entire approx. 3,000 men of the Green Jacket Brigade were killed, wounded or captured) bringing out half of his original command.

This part is fiction though the escape is based on fact.

When Lt. Randal returns to England he is assigned to MO-9 commanded by Lt. Col. Dudley Clarke, the officer who originated the idea of British Commandos. The first raid is carried out. Everything that could go wrong did. Lt. Randal suggests a smaller force might carry out ‘guerilla war from the sea’ and is given permission to raise a unit to conduct pin-prick raids.

Lady Jane Seaborne, Special Operations Executive, adopts Lt. Randal’s outfit as her pet project. She volunteers it for No. 1 British Parachute School and Special Warfare Training at Castle Ackcancarry. Then Lady Jane arranges for Raiding Forces, as the small-scale raiding unit is called, to make alliances with various intelligence organizations such as Special Operations Executive, Political Warfare Executive and MI-9 (Escape) to carry out their direct actions operations.

While a blend of truth and fiction the details of the tactics, training and the organizations described are accurate down to the ground. Much of the history has never been written in fiction ever.

Those Who Dare tells the story of a small band of Commando’s learning the skills to become an accomplished raiding force able to attack unannounced from the air or sea and as Winston Churchill said, “snatch German sentries from their post”.
Posted by carolsv at Tuesday, June 21, 2011 4 comments: