carolsv
PA, NJ, United States
I am a baby boomer daughter of a paratrooper WWII dad, Arthur 'Dutch' Schultz, 82nd Airborne, who was portrayed in The Longest Day as a citizen soldier on D-Day. I am also the stepdaughter of a Navy WWII radar specialist on the Cleveland, a light cruiser in the Pacific. I'm an attorney, professor, writer, wife, mom and yoga enthusiast.

This is a touching movie about a Vietnam veteran with PTSD and the impact that the aftereffects of war has on his relationships. Soldier's Heart was the term originally used to describe the veterans of the Civil War and the symptoms they displayed, which included cardiac and anxiety physiological responses. This is an important film for returning veterans of all our recent wars.

Posted by carolsv at Thursday, February 19, 2009 No comments:

This website details the large number of children born to German women post WWII who were fathered by American GIs. There were 67,000 by 1955 due to the occupation forces remaining in Germany. This is a little known story of children who often were raised in orphanages because of their paternal parentage. Those who remained with their mothers were taunted and mocked.
The legacy of World War II was long and harsh for many of these children.
Posted by carolsv at Saturday, February 14, 2009 No comments:

Hand Me Down Hurt


Written by a physician, this article discusses second hand trauma and the mechanics of transmission of PTSD from parent to child. Some of the symptoms such as anxiety and hyperarousal are recognizable in the children of war veterans.
Posted by carolsv at Wednesday, February 11, 2009 No comments: 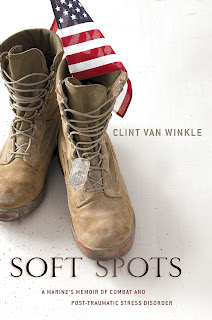 An excerpt from a new book, out in March 2009, which is a poignant and shattering story of PTSD in our new generation of veterans.

We’d been told it would be a good idea to write a “death letter” in case we didn’t make it home alive. The First Sergeant said we should write the letter to our loved ones: wife, children, parents, or whoever. It didn’t need to be long, just a memo that would give the family closure in case we died on the battlefield.

He was brief, just told us to write, address them, and then to hand the envelopes over to him. He’d make sure they made it to where they needed to go once you stepped on a mine, got shot by a friend, or were blown apart by a rocket propelled grenade. Eighteen-year-old Marines had to drop their superman acts and face the truth of war--people die. As if a letter was going to make anyone feel better. We were left to ponder our young lives, to sum it up on notebook paper, then seal it in an envelope. No stamp required. The government would pay for that.